There is a glaring lack of diversity within the nonprofit sector and philanthropic community that harms not only minority communities but nonprofit institutions themselves. Research shows people from diverse groups create novel solutions, introduce different thinking patterns and increase performance, creativity and innovation within an organization (Chandler, 2016).

Defining how an organization thinks about diversity is a critical starting point because it can be used to describe differences of race, ethnicity, gender, sexual orientation, economic standing, and physical or developmental disability within a group of people. Racial diversity within the nonprofit sector is becoming increasingly important as evidenced by the prediction that by the year 2042, minorities will overtake the majority population in the United States (D5, 2015). This reality is contrasted against the statistics of the philanthropic community and the nonprofit sector in general which remains mostly white: as 79 percent of the foundation workforce and 91percent of the CEOs and Presidents identify as white (see figure below) (D5, 2015). The traditional power dynamics created between philanthropy, nonprofit organizations and the community beneficiaries of the nonprofit work is imbalanced. Such that, philanthropy holds the greatest reward power and nonprofits assert more control over the communities they serve (Spilka, Figueredo & Kioukis, 2014). The question  then is how to harness the energy and resources of philanthropy to balance the power within the sector and promote diversity, equity and inclusion (DEI)? 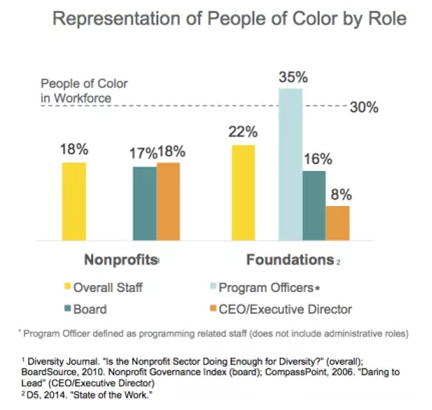 Many questions regarding diversity, equity and inclusion within the nonprofit sector and individual organizations must be considered, including how those terms are defined, how may populations that need to be better represented within positions of power be identified and what are the actions that need to be implemented to fully incorporate new and different points of view? D5, the coalition that coordinated a five-year study on the topic, provide the following succinct definitions:

“Diversity is defined as people who bring a unique perspective or life experience to the decision-making table, but focusing particularly on: racial and ethnic groups, LGBT populations, people with disabilities and women…Improving equity means promoting justice, impartiality, and fairness within the procedures and processes of institutions or systems, as well as their distribution of resources…Inclusion refers to the degree to which individuals with diverse perspectives and backgrounds are able to participate fully in the decision-making processes of an organization or group” (D5 Coalition, 2015).

The effects  the lack of DEI cause within philanthropy are amplified by the unequal power foundations hold over nonprofit organizations. The distribution and control of resources by foundations gives philanthropy significant power over nonprofits, occasionally causing nonprofits to drift from their mission to accommodate grant requirements (Spilka et al., 2014). The power imbalance and lack of diversity can cause foundations to inadvertently perpetuate a racialized worldview (Stone & Butler, 2000). In an interview, Aaron Dorfman, President and CEO of the National Committee for Responsive Philanthropy (NCRP), commented on the mission of philanthropy as “contributing to the creation of a fair, just and democratic world. That’s the measure of success, it’s a very high bar and philanthropy can’t do it all but philanthropy does have an important role to play in advancing [racial justice] conversations” (Costello & Dorfman, 2016).

One problem created by a largely white staff, is the perpetual cycle organizations can get caught in when hiring new staff and selecting new board members, see Figure 2 below. When a majority white board or staff looks to recruit new members, the default networks utilized are personal networks of people already connected to the organization (Brown, 2015). Those personal networks have a high likelihood of being racially similar and homogenous which then leads to applicant pools which are predominately white (Brown, 2015).  Unfortunately, this cycle further entrenches the unequal power distribution within the sector. Philanthropy cannot overlook the power dynamics created by unequal representation nor diminish the importance of advancing DEI within the sector. Equipping boards and staffs with the knowledge and ability necessary to have a more nuanced discussion and identify a path forward is a vital first step.

A recommendation for recruitment to promote DEI is to develop best practices for posting and reviewing applications and designing interview questions that ensure a diverse applicant pool and mitigate bias (Brown, 2015; D5, 2015). Just as organizations have best practices and standards in place to minimize risk of corruption and greed within an organization, recruitment practices should be studied and standardized so as to enable minority groups to be considered with minimal interference of an interviewer’s biases. One of those best practices should detail that recruitment cannot be solely based on “who you know” since a homogenous workforce is likely to have a homogenous social network.

The interdependence of the nonprofit sector necessitates that the promotion of DEI can only be achieved if approached on both the sector-wide and organizational levels. David Renz identifies that “complex community issues are solved beyond the walls of single nonprofit orgs, and thus responsive strategies are set beyond the walls of any single nonprofit boardroom” (2013). This is one way the power of philanthropy can be harnessed to promote diversity, equity and inclusion across the sector and work to even out the scale of power.

The current reality of the sector warrants harsh critique, but ultimately there is great promise and endless opportunities for philanthropy to impact the nonprofit sector and the communities they work in, due to the unique position within society it occupies. The freedom of mission to make a discernable difference in the promotion of DEI and provide a model of success for nonprofits and the society at large will become increasingly relevant as the demographics of the country shift. There are leaders already taking bold steps and courageous actions to advance racial justice and it is exciting to imagine the impact possible if others follow in their footsteps and persevere over a long period of time to realize a diversified, equitable and inclusive community.

Brown, A. (2015). The state of diversity in the nonprofit sector. Community Wealth Partners. Retrieved from http://communitywealth.com/the-state-of-diversity-in-the-nonprofit-sector/

Chandler, J. (2016). Nonprofits, you are the champions for diversity, inclusion and equity. National Council of Nonprofits. Retrieved from https://www.councilofnonprofits.org/thought-leadership/nonprofits-you-are-the-champions-diversity-inclusion-and-equity

Costello, A. (Interviewer) & Dorfman, A. (Interviewee). (2016, July 7). Who really benefits when billionaires give away their wealth? Tiny Spark. Podcast retrieved from http://www.tinyspark.org/podcasts/who-really-benefits-when-billionaires-give-away-their-wealth/

D5 Coalition. (2015). State of the work: The road to greater diversity, equity and inclusion in philanthropy. D5 Coalition. Retrieved from http://www.d5coalition.org/wp-content/uploads/2016/04/D5-SOTW-2016-Final-web-pages.pdf

Christy Dargus is passionate about cultivating authentic and engaged community. She received her Master of Nonprofit Leadership and Management Degree in May 2017 from ASU’s College of Public Service and Community Solutions. She completed her undergraduate work at Texas Christian University, earning a Bachelor’s Degree in Psychology. Christy was the first Neely Fellow in the Diocese of Arizona and currently works as the parish administrator at St. Stephen’s Episcopal Church in Phoenix.