Give a shirt: Changing slacktivists into activists

Supporting a cause is now easier than ever.

Forget throwing on overalls and a pair of gloves to pick up trash or dig through rubble. Never mind laboring in the heat to plant trees or paint houses. Scrap the notion that in order to support a cause, you have to actually get your hands dirty.

These conceptions are facetious, of course, but according to a current trend sweeping the nonprofit scene, all that’s necessary to support a cause you’re passionate about is clicking “like” on a Facebook page. Five minutes and you’ve done your good for the day. Now you can return to perusing Reddit with a smug smile plastered across your face.

Sadly, slacktivism – actions performed via the Internet in support of a political or social cause but regarded as requiring little time or involvement (courtesy of the Oxford Dictionary) – is the popular avenue of support when it comes to contemporary activism. Many charities or nonprofits only require activists to “like our Facebook page” or “retweet this” or “hashtag that.” Sure, work is being done and lives are being improved, but the impact is often times minimal. You don’t have to physically help to help, you simply have to help spread the word, while exuding as little physical activity as humanly possible. But does that really help?

Kony 2012 turned slacktivism on its head. Jason Russell, the man behind the campaign, not only asked people to spread the word via social media, but to also get off their butts and do something about it. The arms of social media only stretch so far, and Russell knew that. In the end, Kony 2012 made some noise and was a success, but it was still considered slacktivism. Why? Because people were only engaged momentarily. He wasn’t able to sustain activism, and it eventually wilted into slacktivism.

Maybe I’m asking too much of activists, but I believe there is a better way.

DNA on a SHIRT (DOAS), a Phoenix-based genetic art company, is combating slacktivism from a new angle – a personal angle. DOAS fashioned a new social responsibility program, by taking the cause out of the clouds (that’s a fancy way of saying the Internet) and placing it on people’s backs (shirts). Each shirt sale combats slacktivism in two ways: 1) The shirts, which are a focal point of daily interaction and have the potential to engage people on exponentially high levels, also allow for engagement on a personal level, and provide a campaign that lasts for the life of the shirt, and 2) they allow the activists to physically become a part of the campaign while supporting a cause, as a percentage of each sale goes directly to the nonprofit. By handing an activist a shirt, the cause is now their cause, rather than a cause residing in the endless void of the Internet. 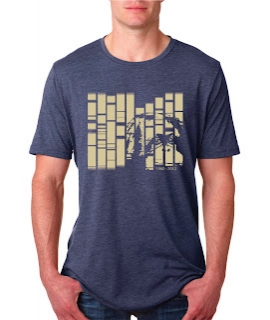 DOAS’ first installment of genetic art T-shirts featured Duchess the Orangutan of the Phoenix Zoo (right). Through the Duchess tee, DOAS provided a means to engagement that had more substance than social media promotions and allowed activists to personally become involved in the campaign. A portion of sales from each shirt also aided the zoo’s work to conserve wild orangutans.

The company recently joined forces with the Cheetah Conservation Fund (CCF) in Namibia – the largest research and education center for the conservation of cheetahs – to support the endangered cheetah in their race for survival by taking the cheetah’s plight out of Africa and placing it on the backs of activists nationwide. Similarly, a portion of proceeds aids CCF’s work.

With this T-shirt model, activists becoming walking billboards for the cause, personally making an impact that lasts, rather than supporting a one-time cause and watching it fade away. But this is just one way that nonprofits and causes can combat slacktivism. Other ideas may include creating awareness events like Tom’s “One Day Without Shoes,” or implementing gamification to a cause.

If organizations create campaigns that encourage physical activism rather than blogging and tweet sharing, slacktivism could fade away and open the door to more meaningful and impactful avenues of change.

Cooper graduated from Grand Canyon University in 2011 with a bachelor's degree in communications. He currently serves as a staff writer for GCU Today and as head of marketing for DNA on a SHIRT. Cooper's passion for animals and desire to be involved in an organization with an innovative approach to engagement in the nonprofit sector brought him to join DNA on a SHIRT's talented staff.

Supporting a cause DNA on a SHIRT