New Tax Law: Understanding the Impacts on Charities and Giving

Nonprofits rely heavily on giving from private citizens to have the funds necessary to carry out their mission and strengthen their communities. The tax law and jobs act (TCJA) presents many changes for nonprofits to consider in 2018. Charitable giving provides necessary support to nonprofits by providing vital services to communities, and the most giving by far comes from individual donors.

The Tax Policy Center projects that individual charitable giving will decrease by between 4 and 6.5 percent in 2018. The following changes to the law are some of the most critical when considering the effect they may have on charitable giving to nonprofits.

Let's examine each of them. 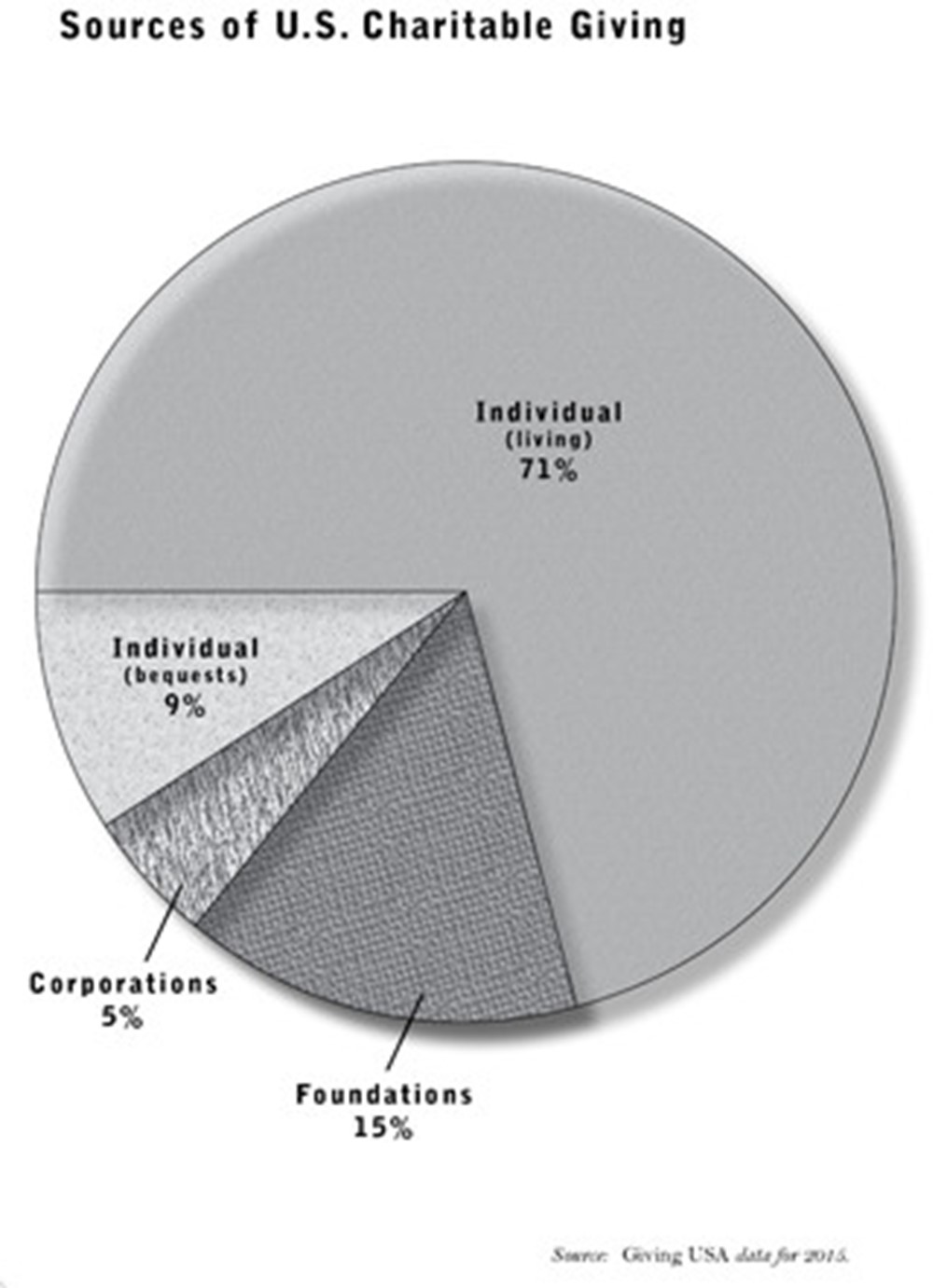 With change in tax laws that can influence philanthropy comes an impact to individuals, charities and communities. What will that impact be, and how significant? And when will the impact be felt? There are several factors to consider for each change.

With standard deductions being doubled, many who itemized their taxes in 2017 may choose not to do so in 2018 as they may see greater benefit from taking the standard deduction. With fewer people itemizing their deductions, fewer will have the incentive to give as only a charitable contribution deduction is available for those who itemize. The Tax Policy Center projects that those who will get an itemized deduction for their charitable donation will be reduced from 37 million to 16 million in 2018. This may lead to people in the middle-income range giving less overall. Wealthy donors will likely be the ones who continue to itemize, thus be less affected by the new law as they continue to receive benefit for doing so. Some may choose to bunch giving by saving several years’ worth of gifts before donating it all in one year to make itemizing worth it.

Another consideration is that with wealthier donors being the ones with the continued incentive, charities that tend to be favored more by wealthier individuals may be less affected, with organizations who depend highly on donations from middle-income donors being at risk for fewer donations. Wealthy donors tend to give more to larger nonprofits such as universities, hospitals, and arts and cultural groups. Smaller community and human service organizations serving our nation’s most vulnerable populations may be the ones to see more of a decline in donations. Figure 2 illustrates the rate at which people donate to different types of charitable organizations. 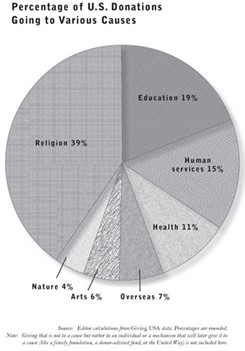 It is important to remember that many people who do not itemize already give without a tax incentive, and some who were incentivized in 2017 will continue to do so without an incentive. However, another consideration is that without the incentive, some donors may see this as a new opportunity, choosing to give to an organization that does not qualify for a deduction, such as a 501(c)(4) or a for-profit organization.

Limited deductions of state and local income and property taxes

State and local income and property taxes are now capped to a $10,000 deduction for those who itemize. This will especially have an effect for people who live in states that have high state and local taxes and a large real estate value, according to the Nonprofit Law Blog. This could also lead some to decide not to itemize. Also, if those who are affected by this are paying higher taxes, they may decide to give less to charity. The National Council on Nonprofits points out that this could put pressure on state and local governments to make tax cuts, which could lead to less funds for programs that serve people in need. If this were to happen this would put charitable organizations in a tougher position, being in even greater need of donations.

The limit for cash donations for those who itemize has been increased from 50 percent to 60 percent. This will provide an increased incentive for high-income earners to give more, but to what extent this may occur is unknown, according to an Independent Sector report.

The repeal of the Pease Amendment has taken away the limits on overall tax deductions for those who itemize. Thus, it may provide an additional incentive for people who continue to itemize under the new tax law.

What did not get passed?

A policy that was introduced but not passed was the universal tax credit, H.R. 3988, The Universal Charitable Giving Act of 2017. This law would give non-itemizers a deduction for charitable contributions for up to a third of what their standard deduction is. The Charitable Giving Coalition (CGC) among many others in the nonprofit community are in support of this law, with the CGC calling it a “fair and resolution that will continue to encourage Americans to re-direct their dollars to charities.” The CGC also believes that a universal tax deduction may encourage giving from younger taxpayers.

Though this law failed in 2017, it has bipartisan support and may be something that can pass in the future to help account for losses charities may face. However, the cost of a universal charitable deduction must be considered; if it were to lead to the government cutting from social programs, charitable organizations could face a loss in other ways.

What is certain with the TCJA is that it will provide less incentive for charitable giving in the form of tax deductions, with those who are wealthy being the few continuing to see a tax incentive. Overall giving will decrease, but it may not decrease by as much as projected due to the increased incentives for wealthy donors. However, a greater decrease will likely be seen by organizations not typically donated to by wealthy donors. It will remain to be seen just how much less people will give, but research-based projections must be considered by charitable organizations adjusting to these changes.

Projected changes are based on the idea that people will not give or give less when a tax incentive is not present. This is not always the case, however, and with the increase of the standard deduction, some may feel they have more money available to give back to their communities. Additionally, there are many reasons people give, and efforts should be made to fully understand these reasons when making plans.

With the new tax law just coming into play this year, it may take some time to fully understand the impact. Individually, some may give less immediately, feeling uncertain about changes and how they will be affected. Charitable organizations may tighten their financial reins even more as an immediate response, making choices to not give pay raises, serve as many new clients, or expand or start new programs, thus affecting the communities they serve. If projections prove correct, charities may notice a larger impact when year-end giving comes around, when many make their charitable gifts. 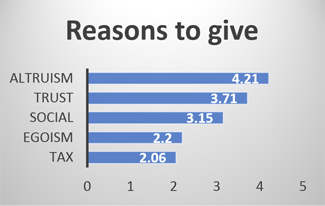 For example, Sarah Konrath and Femida Handy completed a study to examine the reasons 819 people who had given to charity decided to give. What they found were five key reasons people feel motivated to donate, along with one reason people do not. The five factors were altruism, trust, social, egoism and tax. Figure 3 illustrates results, with the most common answers shown on a scale of 1-5, with 5 indicating the factor provided the greatest motivation.

Unsurprisingly, the reason people provided for not giving to charities is financial restraints. While tax incentives and egoism did play a factor, it was not as important as reasons outside of benefiting oneself. This study does not look at demographics; however, further research could be useful to charities when considering methods for appealing to various groups.

Whether the impact turns out to be as substantial as is being projected or not, it is necessary for charitable organizations to be proactive and think creatively about ways to increase revenues and engagement among community members. This needs to happen not only through promoting charitable giving, but through activities that support the hard work of charitable organizations. Planning should include innovative ways to increase funds; for example, by adding social enterprise or working to increase volunteer bases. The nonprofit sector may also benefit from encouraging community members to become more involved by taking legislative actions that support the important work charities do. Making these changes will be an important key to ensuring the long-term stability and success of the nonprofit sector.

Kristin Harvey is a graduate student in the Arizona State University Master of Nonprofit Leadership and Management program. After graduating with her bachelor’s degree in social work from the University of Wisconsin-Green Bay in 2013, she gained experience working with children and families for several years before deciding to seek the education necessary to take on a leadership role. Her goal when she completes the MNLM program is to take on a leadership position where she can continue her work toward empowering individuals, families and communities or a position in animal welfare.